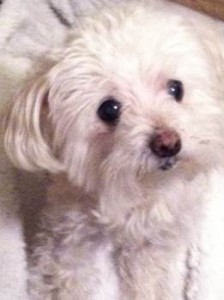 This beautiful Maltese dog is like many of our pets, an important member of the family. Pets teach us much about life and loyality. Be sure to claim your free book at www.ilovepetstories.com

We spoke last week and you were kind enough to listen to the story of the passing of my sweet little Maltese, Charlie, who was nearly 16 when he died last June.  You asked me to write the story down, so here it is.  Thank you for caring!

My Charlie was such a dearheart, such a joy; very refined and noble, a real little prince kind of guy but with no affectations.  He shadowed me softly, not obtrusive, and I adored him, he tickled my heart on a regular basis.  He did not have a mean bone in his body, and never knew a cruel hand, just love.  His passing was very sad, but blessed.

Charlie and I were so connected, it was amazing.  He was psychic in his way and we were totally tuned in together.  One example is when I was freelance writing and acting, I had no set routine, and my ex husband told me he would know 10 minutes before I got home because Charlie would get up and go to the door and wait.

People were usually surprised at Charlie’s age, most assuming he was a puppy or young buck.  But as he was getting up there in years I could see signs of aging–but hey, don’t we all have that?  You adjust.  His hearing diminished, he got a bit “dotty” and confused sometimes, slept a lot more, could not hold pee as long, etc. He also knew his limitations, and stopped sleeping in bed with me last year as he had to get up and pee more often and would come in my bedroom and shake his body to make the various metal things on his harness rattle and jingle so I’d wake up to take him out.   He did not experience anything remotely debilitating and remained vibrant, energetic, and playful, with a great spirit and that ever present insatiable appetite.  I knew from when he was a puppy that he had a bit of an enlarged heart and a murmur, but the heart issues never created any kind of problem.
I do think I had been preparing for his passing, albiet reluctantly, sometimes with guilt, but a necessity as part of having a pet/family member dependent is knowing that in all likelihood you will outlive them.    I knew it’s a matter of time and 16 is a serious senior age.  I lamented the day, and it arrived….and I have to say it arrived in a blessed way, the way I wished.
I never wanted Charlie to suffer or experience a long drawn out demise as with cancer, kidney failure, etc.  It was unthinkable to entertain the choice of whether or not to put him down.  My wish was that he would pass peacefully, and not suffer, preferably in his sleep.
The weekend before he died, he danced on two legs for a cookie and the morning before he died he ate well, followed me around, lobbied for cookies, etc.  And that day our spiritual/psychic connection was as strong as ever.  When I got home from work that night, before I put key in lock and opened the door, the thought popped into my head, “What will I do if Charlie is dead on the floor?”  I shook it off and dismissed it as morbid.
When I cracked open the cottage door, my cat Patch met me at the door and Charlie stood up on the couch where he was dozing, wagging his tail, and jumped down to greet  me, same as always. I took him out and gave him a cookie, then a As I was settling in, I heard him slip and fall and assumed it was my Patch getting rough with him and I was going to reprimand him…But Charlie just fell over, gave just a short few yelp cries, and stayed down….
I called my veterinarian–thank God for their 24/7 emergency care–bundled Charlie up in a soft blanket, and drove with him on my lap, stroking him, and he passed peacefully enroute…..I
True  gifts:  the vet on call was my FAVORITE, Dr. Bill,  and Charlie’s primary, known him since a pup and very caring….Charlie did not suffer, he .WAITED for me to be home, and hold him and be with him…..Dr. Bill was warm and wonderful, and I surprised myself by not freaking out with Charlie’s limp body but rather stroking him as I talked with Bill for a while, it felt natural to just stroke his little limp body, and it also felt so right to kiss Charlie goodbye….It was a gift, a real blessing to be with him before, during, and after his peaceful passage.
Funniest thing of all, the punctuation of the experience:  on the way home, I finally put on the radio and the last song I hear before I pulled into my driveway was one I’d never heard, recorded live at an outdoor concert last year, called “Cosmic Charlie.”  Mostly instrumental, minimal lyrics, and because live hard to hear the few lyrics but those I caught were:  “loving you…loving you….loving you” and at the end, “Go on home, your mama is calling you.”  I sat in my car in the driveway for a minute or so as it ended….laughing and crying at the irony.  Now if THAT isn’t a perfectly cosmic sign from God and Charlie, I don’t know what is!
But wait–there’s more Charlie mojo!  I was told by a friend that there is a restaurant in relatively nearby Hunter Mountain called Cosmic Charlie.  And the next morning after Charlie died (which I took off from work) I got up, turned on the radio just as a song was finishing up and then a commercial came on–for Cosmic Charlie’s restaurant!  Never heard it before, or since, and turns out there were a brand new advertiser.  AND I was lucky caller 3 and got tickets for the station’s lunchtime  Parlour Session Concert with Eric Anderson, who announced his new album is called—ger ready!—Tales of Love and Death!  When I got back to the office after the concert,  one of my officemates emailed me and told me to google Cosmic Charlie’s restaurant, which I did…to discover that their logo/mascot is a dog!  I mean all this stuff is really that is some serious messages from my little boy….MOJO!
I was grieving and emotional and remember all kinds of moments from our life together.  He was my beloved companion through many life changes, including moving, divorce, and going from freelance to working full time.  He was there to rock and roll with me, and so I felt a tremendous void when he moved into the cosmos to be forever “Cosmic Charlie.

I had Charlie cremated and scattered his ashes over Martin Van Buren’s Estate, Lindenwald, in Kinderhook, New York, where I used to walk him when I lived in Columbia County.  Charlie was their mascot and the park rangers loved him.  When my sister and I scattered the ashes, in the woods outside the mansion, all of a sudden all these black birds descended onto the trees and were silent witnesses, as were a herd of goats, who pressed themselves up against the fence to watch.  Again, more magic.

No one can “replace” another little being, but after a few months of mourning I felt ready to open my heart to a new four-legged baby, and now have a little Maltese named BeauBear, who is a very loveable and I have a feeling Charlie “picked him out” for me.  As my veterinarian said, little BeauBear had big paws to fill, and he is doing so much to my delight.

Below is a poem I wrote years ago, about walking Charlie at Lindenwald.   I read it when we scattered the ashes, as I have at poetry readings.

Also a photo taken just a couple of months before Charlie passed away.